Featured Story From the Rally to Rescue Contest 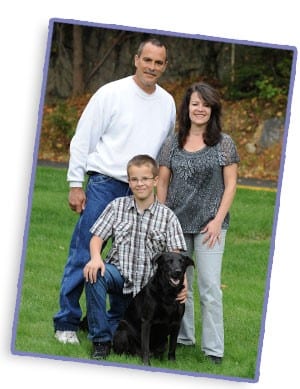 Ten heartwarming stories about abandoned pets given a new lease on life were featured in this year's 'Rally to Rescue' Stories Contest. Thousands of people voted in the fifth annual contest through the Rally to Rescue Facebook fan page. When the winner was announced on October 3, it was a Labrador Retriever rescued and adopted by Sheryl Hogan-Mueller of Sheryl's Den Animal Rescue in West Milford, N.J. Here is the story of 'Pepper.

With weather forecasts predicting snowstorms to white out the upper half of the East Coast in February 2010, Sheryl Hogan-Mueller sat at her kitchen table in West Milford, N.J., with her phone to her ear. What she heard from the voice at the other end of the connection in West Virginia was heartbreaking, and it was cause for action.

The founder of Sheryl's Den Animal Rescue immediately called one of her many devoted volunteers, Debbie Eliassen, also of West Milford, and told her the story. In anticipation of the bad weather, an animal control shelter in West Virginia was opting to euthanize 15 dogs, including a litter of seven puppies, rather than possibly venture through the anticipated snow to care for them.

"I had sat there, listening to the animal control officer and was getting so upset," Hogan-Mueller says. "I looked at my calendar, saw I had a rare couple of days that weren't busy and called Deb. I told her, 'I'm driving to West Virginia to save those dogs. Tell me I'm crazy to do this.'"

Eliassen couldn't and wouldn't. "The situation was appalling," she says. "It bothered me so much. Twenty minutes later, I called Sheryl back and told her I'd be her co-pilot."

Their extraordinary response to save the lives of those15 dogs also would end up saving a Labrador Retriever named "Pepper."

Within 90 minutes of making their decision, the women were in Hogan-Mueller's small SUV, pointed south for a seven-hour drive to West Virginia. After an hour, it became clear the weather forecasts had been wrong. The snowstorm that was to arrive the next day was coming early.

"The farther we drove, the more snow that came," Hogan-Mueller says. "For the last hour of the trip, we drove no more than 30 miles per hour on the windy mountain roads."

Besides managing the drive in poor conditions, Hogan-Mueller and Eliassen made phone calls from the road. Usually organized about placing dogs into foster homes, the situation required lining up some of the around 60 foster families who volunteer for Sheryl's Den Animal Rescue to be ready on short notice.

Hogan-Mueller and Eliassen arrived in West Virginia with several inches of snow on the ground. The next morning, after brushing a night's worth of snow off the car, they picked up the dogs from the shelter. Forty minutes into their slow return home, they saw a peculiar scene unfold along the highway ahead of them.

"A car abruptly stopped at the side," Hogan-Mueller says. "Out of curiosity, we watched to see what they were doing. We saw them open a door and throw something out."

Hogan-Mueller and Eliassen pulled over upon recognizing it was a dog that had been discarded. Their adrenalin started pumping. They felt shocked and helpless.

The Labrador was malnourished and deeply afraid. She was hobbled by injuries, had cuts and scars, and patches of hair were missing.

"It took 15 to 20 minutes to get close enough for Sheryl to slip a lead onto Pepper," says Eliassen. "She was so afraid but didn't run from us. I'm not sure Pepper could have run in her condition, but she seemed to understand we wanted to help."

With the unexpected addition to their group of passengers, the women discussed what to do with Pepper as they drove. They decided she would go home with Hogan-Mueller to be fostered for eventual adoption. A veterinarian soon determined Pepper was hosting parasites, had a swollen thyroid, a broken right hind leg and dysplasia in both hips. One hip required surgery; the other was deemed irreparable. Despite the list of physical ailments, Pepper's emotional condition grabbed Hogan-Mueller's attention even more.

"Physical wounds heal," she says. "The hardest part to heal was Pepper's emotional wounds. I worked months to get her to look at me and trust me. The slightest move caused her to run upstairs. We couldn't touch her."

Hogan-Mueller, who works from home as a freelance paralegal, spent hours at a time talking to Pepper. She gradually gained enough trust to touch the dog. After Pepper felt safe with Hogan-Mueller, the dog slowly began to trust her husband, Paul Mueller, and their son, Ryan Mueller.

Hogan-Mueller estimates Pepper is around 5 or 6 years old. Gray and white highlight her muzzle and speckle her face. Pepper was adopted by the Mueller family, with Hogan-Mueller being unable to bear the idea of her "Mama's girl" experiencing more uncertainty after it took so long to win her faith. Pepper is all the better for it. She is a mellow companion who greets visitors with gleaming eyes and eager barks.

"Her progress is an amazing affirmation of the true spirit of a dog that has received patience and love," Eliassen says. "Sheryl has a heart of gold, and Pepper is with a loving family where she belongs."

Pepper is well-behaved and affectionate-, but would rather nuzzle with Hogan-Mueller than play with toys or romp in the yard. She seems to have missed out on her puppyhood.

"We had to teach Pepper how to play," says Hogan-Mueller. "She had no idea what to do with a ball or chew toy. She wouldn't carry them or play fetch. She still would rather be around people than play with our other dogs, 'Misty,' a Catahoula mix, and 'Casey,' a Saint Bernard."

Pepper serves as a matronly guide, however, for recently rescued dogs. She gets excited when they arrive, calms them during their stay and watches them as they go to be adopted into forever homes.

After having rescued thousands of dogs in 10 years, Pepper's story stands out to Hogan-Mueller. Rescuing the Labrador was an alignment of too many stars not to make one wonder about the fortune that brought Pepper and Hogan-Mueller together.

The urgent mission to rescue those shelter dogs, which received forever homes, brought the right people to the right place at the right time, despite being a long way from home in dangerous weather. It brought 16 dogs' salvation, and fulfilled Hogan-Mueller and Pepper's destiny. 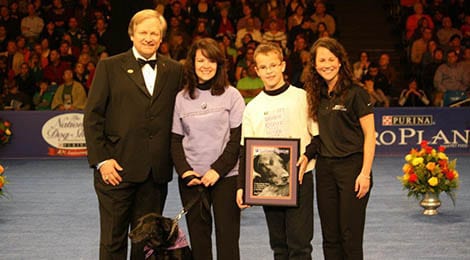 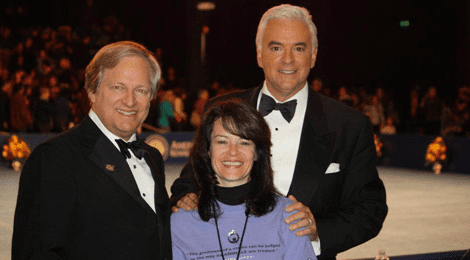 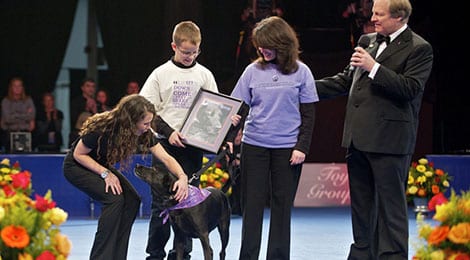